Sir Isaac Newton’s translation of the Emerald Tablet, on which Hermes Trismegistus wrote his famous treatise on the Perennial Philosophy of Alchemy 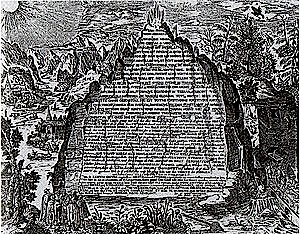 It is true without lying, certain and most true. That which is Below is like that which is Above and that which is Above is like that which is Below to do the miracles of the Only Thing. And as all things have been and arose from One by the mediation of One, so all things have their birth from this One Thing by adaptation. The Sun is its father; the Moon its mother; the Wind hath carried it in its belly; the Earth is its nurse. The father of all perfection in the whole world is here. Its force or power is entire if it be converted into Earth. Separate the Earth from the Fire, the subtle from the gross, sweetly with great industry. It ascends from the Earth to the Heavens and again it descends to the Earth and receives the force of things superior and inferior. By this means you shall have the glory of the whole world and thereby all obscurity shall fly from you. Its force is above all force, for it vanquishes every subtle thing and penetrates every solid thing. So was the world created. From this are and do come admirable adaptations, whereof the process is here in this. Hence am I called Hermes Trismegistus, having the three parts of the philosophy of the whole world. That which I have said of the operation of the Sun is accomplished and ended.