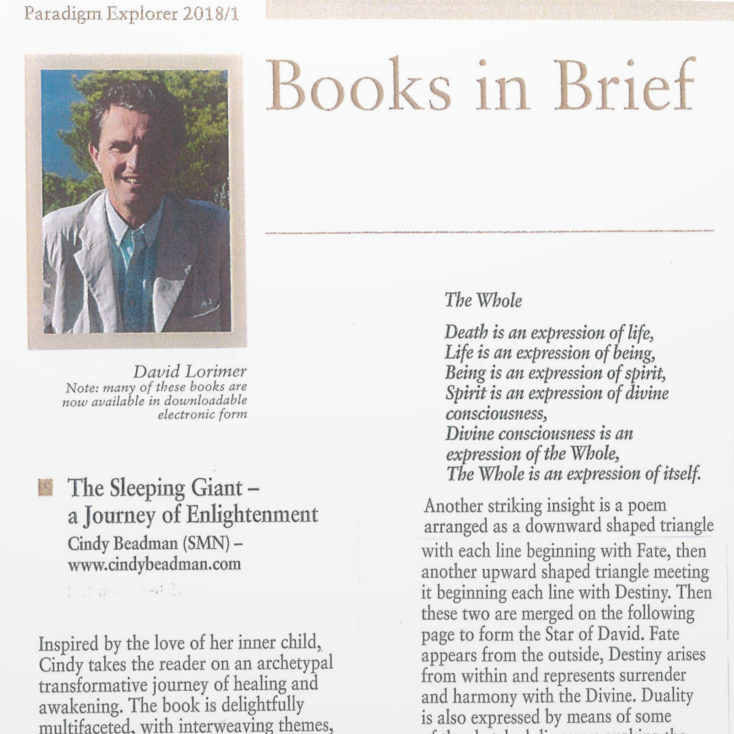 Inspired by the love of her inner child, Cindy takes the reader on an archetypal transformative journey of healing and awakening. The book is delightfully multifaceted, with interweaving themes, diagrams, sketches and paintings by the author so that the journey is seen from many developing angles. Part of the narrative structure is provided by a version of Jack and the Beanstalk and his encounter with Giant. Then there are diary entries from her childhood evoking the difficult conflict between her parents; also current diary entries, self-revelatory stories, poems and more general teachings, all of which contribute to the overall tapestry. Here is one of the beautiful poems:

Another striking insight is a poem arranged as a downward shaped triangle with each line beginning with Fate, then another upward shaped triangle meeting it beginning each line with Destiny. Then these two are merged on the following page to form the Star of David. Fate appears from the outside, Destiny arises from within and represents surrender and harmony with the Divine. Duality is also expressed by means of some of the sketched diagrams evoking the evolutionary process of consciousness and the journey of the soul, which is spiral rather than linear, with pockets of darkness to be brought into the light, as also streaming through the dynamic and colourful paintings. Towards the end, there is a poetic Starlight Message, part of which is about breathing in the light of your loving wholeness so as to breathe it out again and become more than love by letting go of love. This is a mystical and beautiful message to the soul.